woman on the verge of a technical breakdown

Hard drive of my computer: Dead.

Replacement phone: Was working. Now not so much.

I’ve been stalking our LA friend, Wass, because he’s a big Mac genius and I’ve needed immediate assistance with my computer. The poor guy spent so much time trying to fix my technical problems that I think he memorized my last post. When I told him he was my techno hero, he modestly proclaimed to only be a sleep sack maniac. Photo of Wass in his sleep sack, hopefully coming soon.

I get so tense when technology fails me. Do you think our great great great grandparents flipped out over communication breakdowns?

Ophelia: Phillip, I just can’t take it anymore. This feathered quill pen has broken again! It’s making me crazy. Why didn’t we spend the extra 3 cents on the goose feather pen? Why must you be such a cheap bastard and settle for the turkey feathers? They just never last.

Ophelia: And the pony express has been atrocious this year. My sister didn’t get my letter for three months. THREE months. My god, she thought the plague had gotten me.

Phillip: Honey, I will fix it. I promise. The pen. The ponies. We’ll fix all of it.

It must have bummed them out too. Perhaps you just noticed that I was not a history major in college.

Speaking of LA (well, I was speaking of it like six paragraphs ago), Rick’s best friend surprised us and flew into town from California for a quick visit (what a cool jet setter). We decided to host an impromptu brunch (ok, we were pressured into but still happy to do it).

Suddenly, I was panicked about the state of our apartment.

So I went on a hiding binge, stuffing crap into drawers and pushing junk into cabinets. You’ll notice this crafty, secret spot I found next to the bed to hide a few boxes.

Of course, when I do this sort of thing for company, I actually become convinced that I really did organize and clean out everything. Until my husband happens to mention that he REALLY can’t get into his side of the bed.

Damn. Why does he have to be such a pansy?! The apartment looks so good. 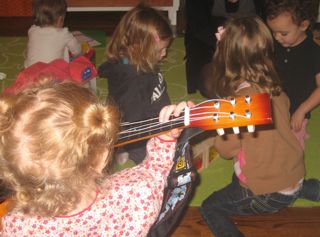 So everyone showed up and played nicely. That would be six girls (between the ages of 11 months and 4 1/2).

No girls gone wild or girls behaving badly or anything. A real polite bunch.

For the first two hours, Dylan didn’t want anyone there or anyone playing with her toys or anyone talking to her parents. After that, I think she had a pretty good time.

So did the rest of us. And if anyone noticed the boxes hidden next to the bed, they were too courteous to mention it.

And speaking of snowsuits – wait, I haven’t mentioned snowsuits? Well, I meant to. Here’s a shot of 3 1/2 Dylan sleeping in her 1 year-old sister’s snowsuit. 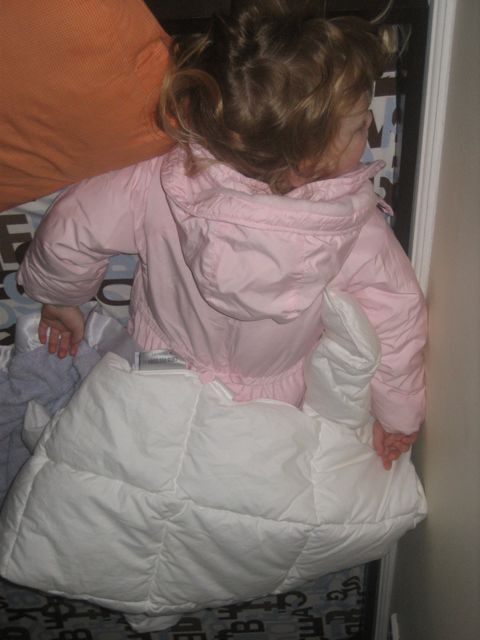 I don’t know about you but nothing lulls me into a deep slumber quicker than an extra snug down parka.

MP is the lucky birdie to win our super fab giveaway! Thank you to all the amazing companies who participated:

The results of our mama poll are in…

What do you and your spouse fight about the most? 19% of you argue about house keeping. 16% fight about in laws. Another 16% say it’s the money issue. 13% argue over child rearing, 9% about work and another 6% about sex. 3% of you do battle over your housing situation. 12% say you and your spouse fight about everything (too tired and too cranky). Finally, 6% of you checked the “other” box. Of course, now I’m dying to know what on earth you argue about.

Check out our latest poll. How far would you go for a sniffles free winter with your kids? Click on, “your mama says what?” and give us the mama dish.

17 Responses to woman on the verge of a technical breakdown

you can fix it, right mom?

By Daphne Biener The kids were set on breaking some world records last fall, which brought the three of us...