what not to wear if you’re the president

You all know that I love the New York Post. I mean, it’s the only paper where you find out that Eva Longoria is dating Penelope Cruz’s little brother. That Ryan Phillippe is handling well his ex-wife’s engagement to some agent guy who’s sadly not Jake Gyllenhaal. And that Jon Gosselin isn’t happy that Kate is taking the kiddos to Australia.

And they report some less import stuff too.

But on the front page this week, is a huge headline, “Should the leader of the free world dress like this – even on vacation?” With this photo…

The New York Post is all in a tizzy because Obama is the FIRST president to wear flip flops. Or at least the first one to get caught wearing them.  I’m sure just before Monica swaggered into the Oval Office with her best blue dress, Clinton said, “Do you mind if I change into something more comfortable – like my Havaianas flip flops?” Or at least that’s the story I heard.

Anyway, I think Obama looks casual chic in his flip flops and what the hell else is the guy supposed to wear on vacation in Hawaii? Crocs? Bush numero dos has already been there, done that.

That picture is tough to take. Rachel Zoe – where are you? Rip the black socks off that man.

Anyway, I’m just a little disappointed in the Post and would prefer if they’d get off Obama’s case because he’s actually got some style. Unlike… um… this guy… 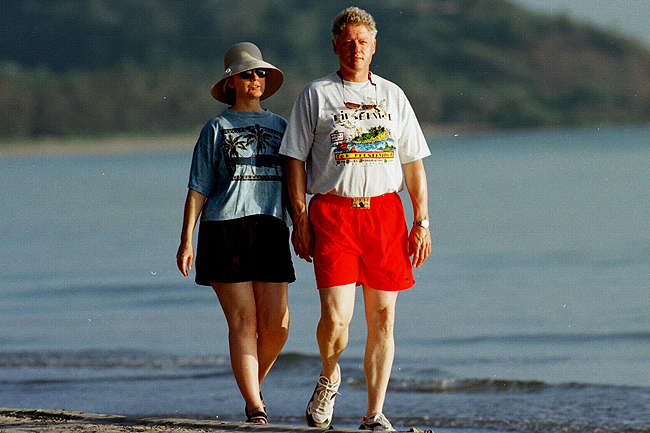 Although to be fair, this photo was taken in 1996. I think we were all wearing our white logo t-shirts tucked into our huge red shorts back then. Weren’t we?

So New York Post, you know I love you. In fact, I’m obsessed with you. But leave Obama’s fashion sense out of this. And please go back to focusing on stories that matter like NFL Quarterback Brett Favre’s sexting controversy.

Editor’s Note (that’s me! I’m the editor too!): All these photos were found in the New York Post. Just in case you thought I had time to hunt down historical Presidential photography while taking care of four kids.

Contributing mama Erin K. Butler is about to go from a family of three to four. And she’s got all the guilt that goes along with it. Click here to read more. (And there’s a baby update at the end of the post!)

Our Contributing Mama Erin K. Butler is having a baby. Like probably today! While waiting for the good folks at...