i could never make it as a dance mom

I’m pretty confident I could never make it as a dance mom. All three of my girls have taken dance at different times but none of them have passionately thrown themselves into it the way some kids do.

I know children have packed afternoons with jazz, tap and ballet. Their closets are jammed with glittery recital outfits. Dance really is their life. But my girls have floated in and out of this world.

This past school year, my daughter decided to take acrodance. It’s some kind of combination of acrobatics and dance which seemed like a good fit for her. Plus the monthly fee was reasonable and there was a recital at the end. Perfect.

But I started to feel like I must be in some kind of hidden camera show about ridiculous dance fees because they kept asking for more and more money.

First, the costume fee. Which I expected would be laced with precious gems based on the price. Then the recital fees. Then I still had to buy additional tickets at the price of $27.50 each. (Out of principle, I refused to buy one for my 3 year old son because his appreciation for dance is the same as his appreciation for nap time.)

In total, I spent — . I have no idea how much I spent!! I refused to add it up. Especially because by the end, my kid wasn’t exactly brimming with enthusiasm. She kept saying, “I can’t wait for the recital to be over, so I can just be on summer vacation.”

But I was still excited to see her perform. And to witness that very expensive recital outfit glittering on the big stage.

And then a friend said to me, “You know the recital is four hours, right?”

Look at the number of performances… 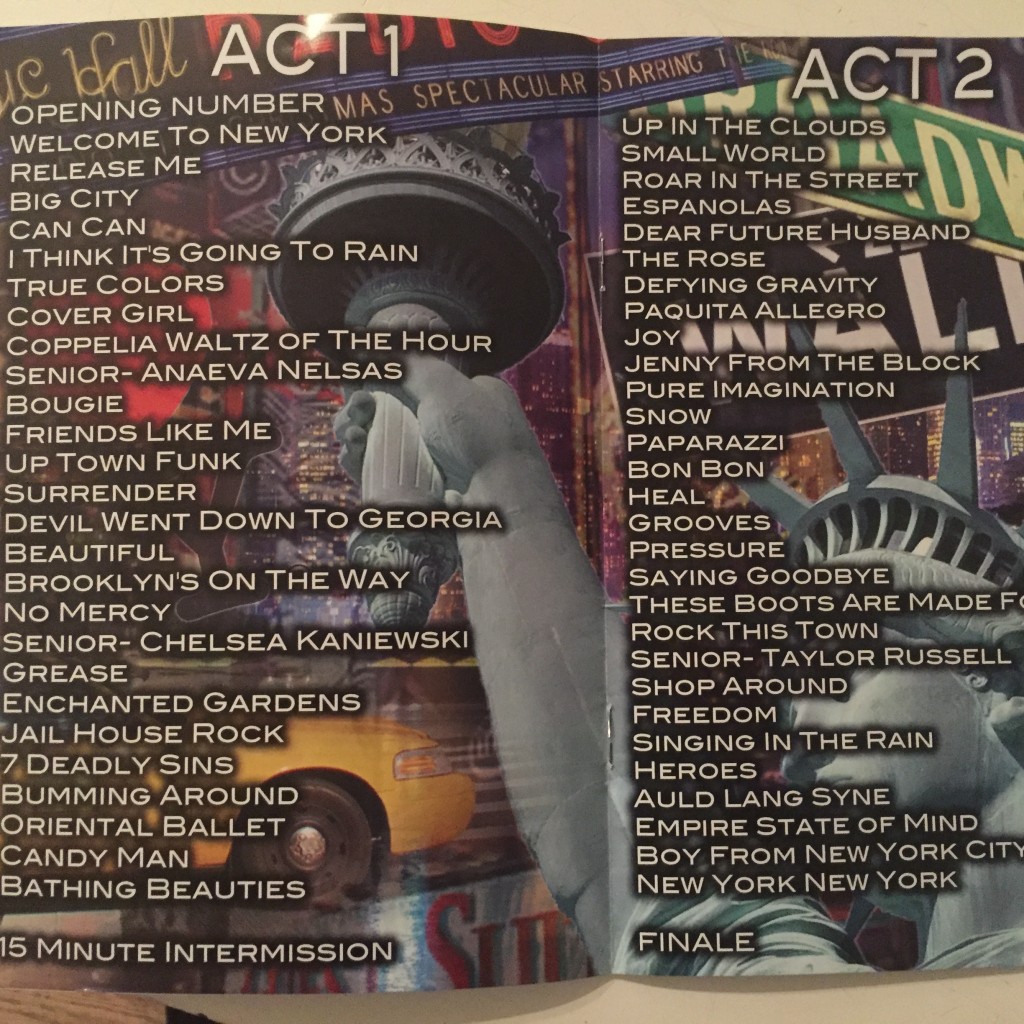 It ended up being 3 hours and 45 minutes.

I loved watching my daughter for 2 1/2 minutes of that 3 hours and 45 minutes.

And many of the other performances were adorable. And some were really impressive. These kids could dance!

But I spent a good chuck of the time in the lobby watching my 3 year old open and shut a stage door.

And here’s the thing. You can’t leave early. They don’t want the place emptying out before it’s finished, so they hold your kid hostage until the end. A few parents retrieved their children early because they had a bar mitzvah or other engagement but most of us were completely trapped.

Once the final curtain fell, I clapped exuberantly.

And a short 20 minutes later, I finally got my kid back.

So proud of her. So proud of me for surviving. So proud of my 3 year old for not pinching his finger in that stage door. Really hoping we can take a break from dance.

And another school year ends

Kids are graduating, everyone is saying good bye for the summer, children suddenly seem older and you realize that in...